Feel free to see our "A" rating reviews on Angie's list.

Grout Lines did a complete overhaul, demo of our bathroom and we couldn't be happier. Bob and his team were professional, friendly, thorough, and respectful. The job was completed in a timely manner, came in at the expected budget, and the finished product is phenomenal. We will recommend Bob to anyone that asks!
Sara and Eric Blanchone
Raleigh NC

Hi Bob--
Just wanted to let you know how pleased we are with the work that was done. The bathrooms look fantastic! In addition, the guys were great--very professional. And they even finished earlier than what I had anticipated. I will be sure to recommend your company to others.
All the best,
Beth Markell
Holly Springs, NC

After having the kitchen re-modeled, it was quite appalling how badly the floor tiles were marked, dirty, and missing grout. Bob came in to the rescue and what a transformation! My kitchen floor looks brand new. I would recommend his services to anyone who needs a "facelift" with their tile and grout. The renovation is quite remarkable.
Eric & Mary Armstrong
Raleigh, NC

I found Groutline Solutions through a note left on my mailbox (I typically throw those things away…this time I'm very glad I didn't)…at the time I was getting ready to prepare my house for sale and had been thinking of using one of the prefab bathroom refinisher companies but was floored by a cost I knew I couldn't recover. I live in an older home and I knew I needed to do SOMETHING with the bathrooms. The grout was discolored and dirty from age, the bathroom caulk needed serious help. Groutline Solutions was definitely more economical, but I wasn't sure it would live up to its claims. I called Bob and had him come out and look at my bathroom, I was sure he would balk. Instead, he was thorough and honest about what I could expect. And actually, the bathrooms came out even *better* than I expected.
The house sold without ever listing, and I KNOW the work Groutlines did for me had a pivotal role in making that happen.
Mary Simmons
Cary, North Carolina


Our 10+ year old shower was just plain embarrassing. The caulk was covered in mildew, the grout was brown and there were places where the grout was crumbling out from between the tiles. Neither my wife or I were ready to undertake an entire bathroom remodel – thankfully I found Bob's website and had him do the job. The shower looks brand new – it's just totally amazing. We also had the bathroom floor and tub surround done and those look amazing as well. Bob did such a great job we are planning our next project – removal of an old floor in our kitchen, bath and tiling the area – and Bob will be doing the entire job!
David Ungaro
Raleigh, North Carolina


We recently had our three bathrooms done by Bob. While mildew was not a major problem in our bathrooms, we did have some areas where the grout was missing and discolored, as well as some tiles that needed repair work.

From the time Bob came out to give us an estimate, as well as while the work was being done, he was good about explaining the whole process to us. Bob showed up to work when he said he would and was good about cleaning up before he left. I also appreciated him telling us how to care for the tile and grout after the work was done.

We are very pleased with his work and would recommend him to anyone that asks. Our bathrooms look like new!
Chris Kline
Cary, North Carolina


Our 17 year old MBR shower stall grout was black with mildew and crumbling in places. Bob treated every surface and repaired where necessary. The shower looks new…the photos on the website could have been ours…it was an amazing transformation. We have been so happy with this work over the past year, we had him back to do the hall bathroom as well. Definitely consider this product before doing an entire remodel. Bob was very punctual, trustworthy, and neat. We have recommended him to many friends and they have all been happy.
Mrs. Janet S
Cary, North Carolina


About 10 months ago I decided I could not stand the mold and mildew in my shower any longer. I found Bob with grout lines and asked him to come out for a free estimate. He was very reasonable, so he did the job. I have never been to happy about any repair job in my life. The shower looked better than when it was brand new. He is very professional and a perfectionist about his work. He will not leave until it is right. He is neat about cleaning up afterwards and you will be thrilled with the results.
Linda M
Cary, North Carolina

Groutline Solutions is an economical way to beautify your bathrooms. You will be thrilled with the results. The work Bob did in my house truly helped me sell my home (without ever listing!). They were prompt, honest and hardworking. I would hire them again in a second!
C Williams
Apex, North Carolina 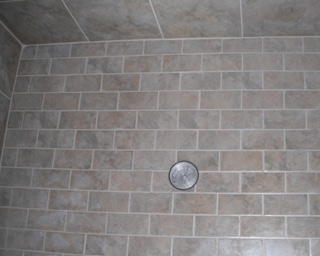